Education by Astonishment - Our Spanish Trip 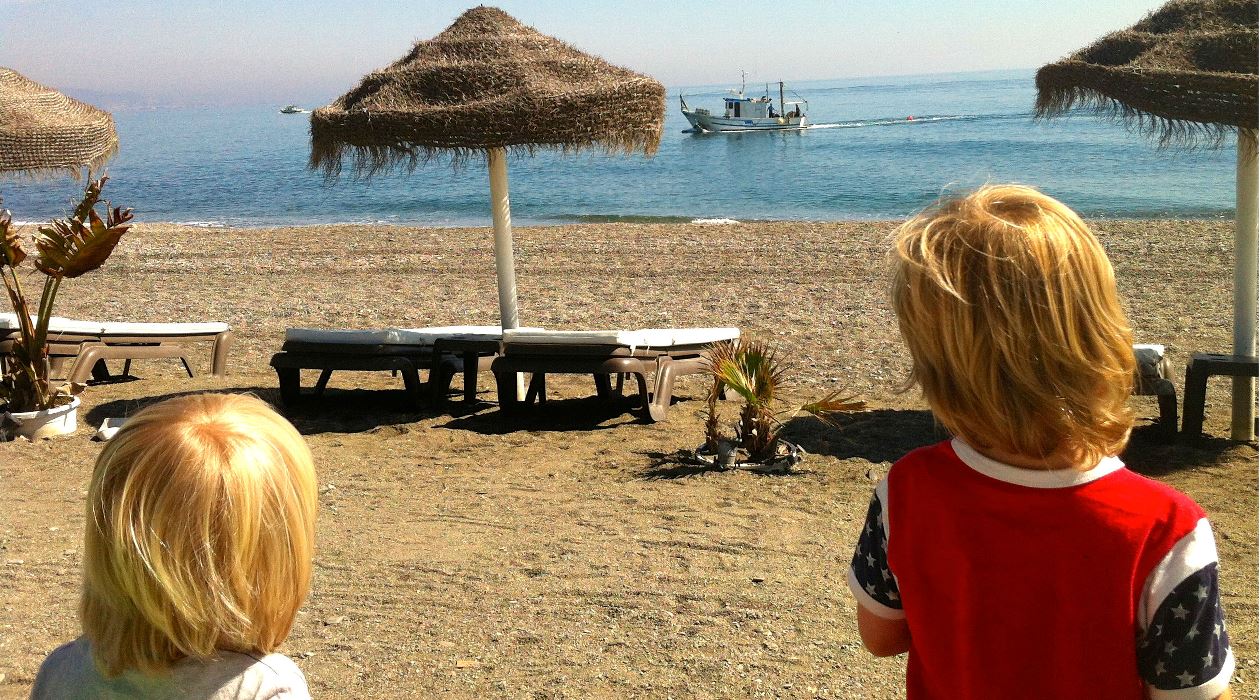 As promised, we are bringing you the adventures of the Hurst family as they educate their children through the adventures experienced while travelling. Read more about their aims here. David takes up the story:

Family expectations
Spain is a country we love and know well. My wife Debs grew up there and I’ve been perhaps 12 months in total on travels and holidays. And last year we also spent a couple of months there in our Swift Escape 696 motorhome. But, even so, we were now preparing to be travelling this time for about three months, including in England, with our two boys Daniel and Darley, aged five and three, plus our crazy collie dog Colin!

We knew from previous times in the country that Spain is rich historically, culturally and geographically, with a very family-centered society. It is also warm enough to be outside every day during winter and spring, which is something essential to our Education By Astonishment concept, in which we’re teaching our two boys ourselves on the road and through travel by visiting astonishing places, people and things.

The Great Outdoors is often greatly missed by many in Britain during those cold months that seem to linger on and on… So we decided to head for warmer lands.

Organising the trip
In fact, it’s often greatly missed all year round by an increasing number and that was something we wanted to ensure didn’t happen to us. So we set off with our plan of astonishing people, places and things to visit.

Spain’s a fascinatingly varied country from its green north to its desert-like dunes in the south-western Costa de la Luz. We had to pack for the likelihood of some heavy spring showers and also some temperatures that could reach a scorching 30 degrees. But the joy of travelling in a motorhome is that you can throw everything in, and for this trip it included some books and pens to ensure we kept Daniel up to speed with reading, writing and maths while on the road.

Organising travel and campsites was as easy as a call to the friendly experts at The Camping and Caravanning Club. After looking through the Club’s Carefree brochure, we told them our planned route and which campsites we wanted to stay on and for what dates. Soon, we heard back from them that our ferries and campsites were booked. The Club also arranged travel insurance. So for us it’s an invaluable asset as all their hard work gave us more time to consider important factors such as which of the boys favorite toys could come away to Spain (as well as our dips into Morocco and Portugal)…

Then, in the first week in Spain, delivered to that week’s campsite to our great excitement was our new Outwell gear: awning, fold-up picnic table; travel barbeque; collapsible basket; kettle, and food pots; pots and pans; washing-up brush; windbreak; plus boys’ mattresses and children’s sleeping bags (complete with torches clipped to them!).

These gave us great added fun, created an extra room and the picnic table gave us alfresco eating as well as a desk for outdoors lessons. The windbreak even helped to contain our two excited boys and dog! All the gear is a brilliant enhancement to our complete camping experience.

Travelogue in brief
We took the excellent 24-hour Brittany Ferries crossing to Santander, then headed Madrid way via various tranquil campsites – Pico de la Miel, Aranjuez, to Despeñaperros and then Las Lomas near Granada – to settle in Andalucia on the southern Spanish coast, mostly at the popular and friendly Cabopino campsite, 40 minutes from Malaga.

Highlights
All of it! We love Spain and its people, plus you can meet other lovers of Spain from all over Europe along much of its coast.

With the aim of our travels to show people, places and things that astonished our two boys and so enhance learning (as we all learn more when astonished and having fun!) we’ve been incredibly lucky on this trip to have seen a wealth of gifts, both natural and man-made.

There was Malaga’s castle views and the city including the astoundingly fervent Semana Santa (holy Week/Easter) parades; Nerja’s huge cavernous caves and the town’s beautiful Balcony Of Europe, which gives stunning views across the sea and land; riding camels on the Costa de la Luz and this region’s awesome sunsets (the best we’ve ever seen); plus trying kayaking and rock-climbing for the first time.

We saw some wonderful Roman ruins in several places, especially near Tarifa; the Buddhist stupa at Benalmádena, Europe’s largest such monument; Ronda, the amazing city built either side of a great gorge; the Bronze Age dolmens near Antequera, which are the largest such megalithic burial mounds in Europe; and the astounding limestone rock formations in the mountains near here.

There was also the awe of seeing an abundance of stars at night and amazing expanses of sky in general; the friendly fellow campers and relaxing campsites where we could chill out to the melody of the singing birds; as well – among our favorite days – simple walks around and from the campsites looking at the springtime flowers and the butterflies while we picked oranges and lemons from wild trees and then coming across creatures such as sheep, donkeys, ponies, goats and geckos. We’ve been on four boat/ferry trips and been lucky enough to see dolphins on each one.

And, naturally, Spain’s sunshine and its beaches. Not only are these idyllic, they’re ideal for teaching on and writing in the sand is a fabulous fun version of a blackboard! And collecting dozens of beautiful shells to be displayed by the boys on our Outwell picnic table. Then there was watching the fishing boats come home while we cooked fresh fish on our Outwell barbeque on the beach… Just perfect days.

Lows
The only low is having to leave Spain… It’s in our hearts even more now. So much in fact that we’re thinking of living here now: the more of the outdoors we see the more we remember how wonderful being outdoors is!

Education and lessons learnt by all members of the family
We’ve all had a wealth of learning from seeing nature, to learning languages, to seeing different foods growing, new experiences such as kayaking and camel riding, and seeing new places despite having previously travelled extensively in Spain.

We notice that while camping we all sleep so much better, our body’s once again aligned to nature’s light and dark. Our young boys have gained a much stronger grip of geography and a much better awareness of astronomy simply from travelling. We’re all also more practical-minded and the boys’ manual dexterity and hand/eye coordination from such activities as helping to put up the awning has swiftly improved.

All of our attentiveness and inquisitiveness has increased, due to seeing so many new sights and being out there in the Great Outdoors. Debs and I feel so much fitter and, of course, it’s healthy all round for our boys to be outside running and playing every day. The food, too – always so fresh, healthy and tasty. While camping you’re much more likely to eat more local and much fresher food.

Then there’s the essential increase in inner confidence our boys have gained from meeting so many new people, and the invaluable life lesson that our world is an astonishing place with overall superbly friendly people in it.

Comments from the children
Daniel says:
“I love Spain because it’s sunny, because there are lots of motorhomes and other campers, the people always smiling at us, and the beaches. I really like learning here, including speaking some Spanish.”

Darley says:
“I like seeing all the cats sunbathing in Spain! And I like playing in our sleeping bags at night.”

Get the Kids Camping

×
Join the Outwell Friends Club
Join the Outwell Friends Club
Sign up to our newsletter
Enter your email
*Outwell processes personal information in order to send you news and information about our product range via forms of communication such as email, text messages, phone, app notifications, social media and communication apps. You can withdraw your consent at any time. Existing members are entered in the competition automatically.